Web Browsers: The War Wages On

Most people are so immersed in the tablet and smartphone wars, but there is still an age-old battle waging – The Battle of the Web Browsers.  For many years, Microsoft’s Internet Explorer was on top and seemed to be the king of the hill.   While that is still true, Mozilla’s Firefox and Google’s Chrome browser were in a tooth and nail battle to see who would capture the 2nd best title for the month of September.  Firefox was the victor with 18.23% of the worldwide market share while Chrome was behind at 17.12%.  Who do you think will come out on top next month? 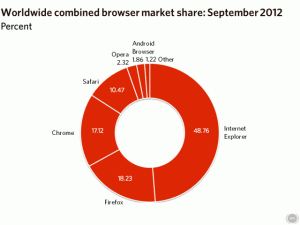 Go here for more information on web browsers at 24HourSupport.